Document that, IF FOUND, would prove John C. Calhoun fathered a baby with Nancy Hanks

This agreement made and entered into on the 19th day of February 1809. I John C. Calhoun of the said state and district, of the first part and Nancy Hanks of the second part, for and in the consideration of the sum of $100.00 per year, to be paid to Nancy Hanks, for the support of an illegitimate son born February 12, 1809. The said sum of money to be paid to Christopher Orr, who shall act as guardian for said child.

John C. Calhoun Signed in the presence of, and on the above mentioned date. Witness Christopher Orr, Robert Brown Norris, Thomas Lincoln.


This Internet "source" says that the above "document" influenced Judge Alley [who wrote the book
Random Thoughts And Musings of A Mountaineer (1941)] to conclude that John C. Calhoun was
Abraham Lincon's father:

The main investigator, Dr. John Sotos,  was on a quest to show that Abe Lincoln had a
disease that was killing him when he was assassinated --


Dr. Sotos' hypothesis was that Lincoln had MEN 2B (a type of multiple endocrine neoplasia [MEN] caused by RET instead of Marfan syndrome (also called Marfan's syndrome), which has been postulated in the past. Although a genetic condition distinct from Marfan syndrome, MEN 2B is characterized by marfanoid habitus, a term that describes the co-occurrence of many Marfan syndrome features.


Therefore, they had to obtain DNA and test it.  The program shows the great lengths to find some DNA that was usable ... with the conclusion that maybe they did and maybe not.  Dr. Sotos' DNA tests showed nothing of the genetic disease: thus, Sotos response was that the DNA was probably tainted/contaminated or mixed with the blood of Major Henry Rathbone who got stabbed by John Wilkes Booth while Rathbone was trying to prevent Booth from escaping the Ford's Theatre.


The best DNA samples were provided by a Lincoln collector, Mark P. Haverkos.

While the overall point of the TV show was to show that Lincoln had a rare genetic cancer syndrome called multiple endocrine neoplasia type 2B (MEN2B),they were not able to prove it or that the samples were even really Lincoln's.

This "begs the question" ... Could DNA from John C. Calhoun be found and compared
with that of Lincoln to show that Calhoun was or was not Lincoln's father?

Here is a webpage about Lincoln's DNA ... questioning as to whether Dr. Sotos should be allowed to investigate it or the results made public:
http://articles.orlandosentinel.com/2009-05-04/news/edp_1_president-abraham-lincoln-lincoln-blood-lincoln-at-ford

Thus, if Calhoun-Lincoln DNA testing were proposed or done, similar questioning could be expected.
Posted by CEH at 9:40 AM 2 comments: 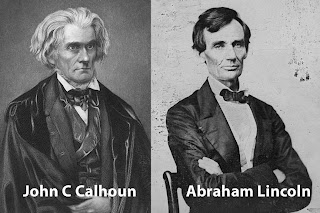 Web-articles:
http://www.tigernet.com/forums/thread.jspa?threadID=670303
http://www.time.com/time/magazine/article/0,9171,849526,00.html
http://abbeville-journal-review.blogspot.com/2010/09/abraham-lincoln-northern-despot-product.html
This "story" has been held to be true by those 'kin' to the Hanks near Anderson, S.C. as well as those 'kin' to the Calhouns in upper S.C.  There are other stories as to who Abraham Lincoln's father and mother were -- and the commonly written "history" that says Abe's father is Thomas Lincoln of Kentucky, and his mother was Nancy Hanks from somewhere in Virginia [now West Virginia].  The name, "Nancy Hanks" seems to have been about like "John Smith" in its usage at the early 1800s: there were a LOT of "Nancy Hanks".  This HISTORY MYSTERY probably won't be solved until somebody is able to compare the DNA of Abraham Lincoln and John C. Calhoun.
Posted by CEH at 9:07 AM No comments:

Abe's Parentage ... as told to me by my grandmother

When I was a teenager [around 1960], my grandmother told me this ...  "We are 'kin' to Nancy Hanks that lived close to Ebenezer Community near Anderson, South Carolina.  That Nancy, in the early 1800s was a waitress in a tavern that was visited often by John C. Calhoun, who later became a famous South Carolinian.  At the time, he was a young lawyer traveling through the area where the tavern was.  He and Nancy got "involved," and she got "in a family way".  Knowing that his future in law or politics was at stake, he had to do something.  A traveling salesman that also was often at the tavern was Thomas Lincoln.  John C. Calhoun paid off Thomas Lincoln to take Nancy Hanks out of the State of South Carolina and far enough away so that nobody would know what had happened.  Having a child out of wedlock is bad anytime, but back then it was terrible.  Anyway, Thomas Lincoln went from South Carolina to North Carolina to Tennessee and finally ended up in Kentucky -- where Abraham Lincoln was born.  So that is how we are also 'kin' to Abraham Lincoln."
Posted by CEH at 8:47 AM 5 comments: